Tribal Malnutrition In Chhattisgarh and How It Can Be Overcome

Among all the tribes the group that gets mostly affected are women and children. Tribal women with poor intake of protein and energy are likely to give birth to a Low Birth Weight infant. 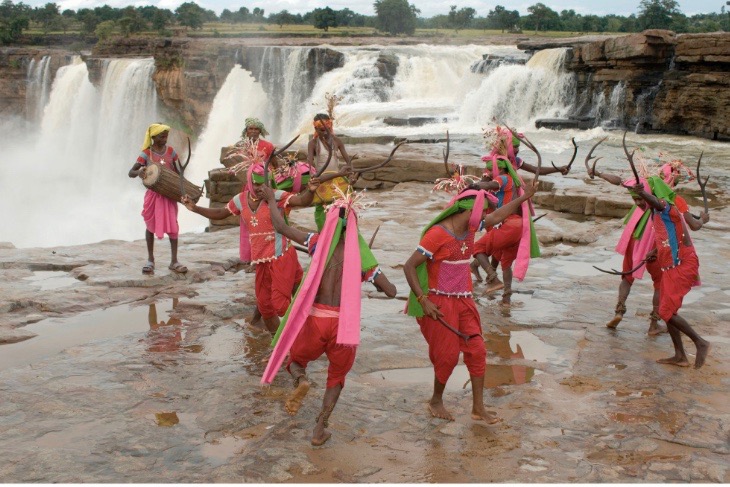 Print
A
A
A

Among the tribal population of Chhattisgarh,  high levels of malnutrition — with women and children the most affected — is a major challenge they face, besides those of poor literacy and lack of empowerment. The nutritional and health issues of tribal women and children can be addressed by giving them iron and folic supplements, supplying them with fortified food and through deworming, besides other interventions.
India has a total of 104,545,716 scheduled tribes which constitute 8.6% of the total population (Census, 2011). There are around 700 different state-specific Scheduled Tribes. Of these 700 tribes, 75 are identified as Primitive Tribes Groups (PTG) due to their pre-agriculture level of technology, stagnant or declining population, extremely low literacy and subsistence level of economy. Chhattisgarh has 7,822,902 Scheduled Tribe population. Of this 3,873,191 are males, 3,949,711 are females and 15.3% comprise the child population. The literacy rate among Schedule Tribe population in Chhattisgarh is 59.09%, and sex ratio is 1020. Gond, Bhunjia, Baiga, Bisonhorn Maria, Parghi, Muria, Halba, Bhatra, Parja, Dhurvaa, Muriya, Dandami Mariya, Dorla, Dhanwar, Kol, Korwa, Rajgond, Kawar, Bhaiyana, Binjwar, Savra, Manji, Bhayna, Kamar, Munda and Abujmaria are some of the prominent tribes of Chhattisgarh.
The heterogeneity among the tribes is quite distinct with each tribe being quite different from the other in terms of language and dialect, customs, cultural practices and life style. Despite this diversity, tribal communities do have similarities, though broad generic ones. They are known to dwell in compact areas, follow a community way of living, in harmony with nature, and have a uniqueness of culture, distinctive customs, traditions and beliefs which are simple, direct and non-acquisitive by nature. The tribal population because of their peculiar way of living do face challenges. The major issues are – poor literacy rates, slow pace of development, lack of empowerment and high levels of malnutrition driven by communicable disease, limited livelihood opportunities, high dependency on land and forest produce, improper infrastructure in remote areas.
All these issues in some way or the other affect the health and well-being of tribes. Among all the tribes the group that gets mostly affected are women and children. Tribal women with poor intake of protein and energy are likely to give birth to a Low Birth Weight infant. Although malnutrition is prevalent among all segments of the population, poor nutrition among females begins at infancy and continues throughout life time.
Status of Health and Malnutrition among Tribes in Chhattisgarh:
Malnutrition has necessarily to be approached from a life cycle perspective. An underweight, anaemic pregnant teen mother has to contend with early pregnancy, inadequate spacing between successive births and poor prenatal nutrition and healthcare. The resulting low birth weight baby faces poor healthcare, hygiene and nutrition practices and develops into a stunted and underweight adolescent. This pattern is replicated over subsequent generations of mothers.
If a child’s dietary intake of protein, carbohydrates, fat and micro-nutrients is inadequate, she/he suffers from malnutrition, adversely affecting his/her health and increasing his/her susceptibility to disease. Equally critical are the underlying determinants that operate at the household level– food security, nurture-care for the mother and child and a healthy environment, including safe drinking water, hygiene and sanitation, shelter and accessible healthcare. Ultimately, whether these basic rights are available or not to individuals and households depends on the social and economic arrangement that determines access to resources and the ability to effectively use these resources.
As per the National Family Health Survey 4, every district in Chhattisgarh has wasting levels higher than 15 percent (rated as very high). Rajnandgaon district has the lowest level of wasting (17.2 percent) and Bastar has the highest (33.9 percent). The health scenario of tribes presents a mosaic of various communicable and non-communicable diseases in consonance with socio-economic beliefs and practices in the state. The widespread poverty, illiteracy, malnutrition, absence of safe drinking water and sanitary conditions, poor maternal and child health services, focused coverage of national health and nutritional services, etc. are the major contributing factors for the dismal health and nutrition among tribal communities.
The above gets authenticated by key health and nutrition indicators as below :

The status of health and nutrition indicators among tribes of the state are poor due to multiple factors which are discussed below.
These can be seen as challenges for further strive :-
Real Time Data: The fundamental problem lies in the non-availability of ongoing real-time data on the nutrition status of individual children pertaining to stunting, wasting and being underweight. Effective action under the Integrated Child Development Services (ICDS) to tackle child malnutrition requires reaching out to every child, monitoring her/his growth pattern systematically on a monthly basis from birth to the age of five, and ensuring attention from both the ICDS and the public health machinery to their nutrition and health needs at the project level and below.
Poverty Issue: The Lancet, one of the most authentic medical journals, has come out with a daily dietary recommendation of 2,500 calories from various food items fulfilling caloric requirements, as well as ingredients essential for growth of different body parts and mental faculties. An estimation of the cost of this daily diet based on the present day prices of food items comes to approximately Rs 130 per person per day. For a family of 5 members this comes to Rs 650 per day or Rs 19,500 per month. This is impossible to meet in the present day economic structure of tribal predominant regions. The minimum wage in India as recommended by the expert Committee, in the name of national minimum wages, ranges from Rs 8,892 to Rs 11,622 per month meant for the unskilled worker. This is unachievable in the tribal region.
The tribal economy can be classified on the basis of their economic pursuits in the following way: 1. Foragers, 2. Pastoral, 3. Handicraft makers, 4. Agriculturists, 5. Shifting hill cultivators, 6. Labourers, 7. Business pursuits. All these professions are directly or indirectly dependent on land. The tribals, due to their poor literacy rates, lack of understanding of the social and judiciary structure, and their inherent shyness remain in the background. The ancient methods of cultivation, lack of use of modern methods, loss of productivity of land, adversely affects their condition, and pushes them into poverty.
Social Issue: Due to the traditional socio-economic practices being adopted by tribals they have limited employment and livelihood opportunities. The difficult living conditions, and hard-to-reach terrain pose problems in the supply chain management of government- supported schemes like Public Distribution System (PDS), ICDS, health care. It also hinders exploring and teaching new livelihood skills to the tribal.
Health Issue: Healthcare is a major problem in the far-flung isolated tribal areas. Lack of food security, sanitation and safe drinking water, poor nutrition and high poverty levels aggravate the poor health status of the tribal. The problem of malnutrition is multi-dimensional and inter-generational in nature. Limited health institutions in vulnerable areas and the tribal’s lack of trust in the modern system of medicine creates problems in service delivery.
Societal Issue: Babies born to undernourished tribal mothers face a high risk of restricted foetal growth and death. Those who survive are likely to be stunted with a high probability of transmitting their poor nutrition status to their next generation. The status of girls/women within the household, their agency and decision-making abilities, especially with respect to their reproductive rights, are important factors which merit a closer look. Facing intra-household deprivations due to their sex and abject poverty, these young girls often forego necessary nutrition, care and rest during their pregnancy period, delivering low birth weight babies. For these babies, the cycle of malnutrition has already begun.
Policy Issues:  While food is an essential component, food-based solutions are not sufficient by themselves. Children may receive a diet which is both adequate in quantity (calories) and quality (nutrients). However, if they are already weakened by ill-health and disease, they will be unable to absorb sufficient nutrients from their food. Unfortunately, our singlehanded approach towards addressing under-nutrition has been through food provision.
Second, there is enough scientific evidence indicating the importance of the first 1,000 days (roughly translating to about 2 years) of a child’s life. It is estimated that about 80% of the brain development takes place during this time. However, children start coming to the Anganwadi Centres (our primary intervention in this area) after they are 3 years old. By then, precious time is lost and it is already too late. In fact, there is limited contact between the child and the system (barring routine immunization by the Auxiliary Nurse Midwife (ANM) and visits by the Accredited Social Health Activist (ASHA) worker in case the child is visibly sick) till the child attains 3 years of age. Thus convergence of schemes and bringing them under one umbrella require deep thought and practice in tribal areas.
Implementation Issue: Considering the multi-dimensional nature of malnutrition, convergence is the key. However, an analysis of the three biggest programmes in this area – ICDS, POSHAN and National Health Mission (NHM) – showed that there were only 39 common high-burden districts among them (NITI Aayog, 2017). The number is likely to be less if we consider the Swachh Bharat Mission (SBM). Such lack of geographic convergence results in substantial loss of resources as well as sub-optimal results. Convergence and coordination among the frontline workers, especially those delivering health and nutrition services is the key. This, in turn, needs to be supported and supervised by a strong monitoring mechanism. The capacities of the frontline worker to deliver on the field needs to be enhanced. While all the programmes have in-built components of Social and Behavioural Change Communication (SBCC), counselling and health and nutrition related education, these are generally neglected and receive less priority, mainly due to their intangible nature.
Following are the points that can be envisioned for intervention :

(Sajid Memon, Joint Project Coordinator, Department of Women and Child Development, Government of Chhattisgarh, belongs to the state civil services of 1998 batch. He has 15 years’ experience of working in externally aided nutrition projects and dovetailing of Information Technology with Nutrition and Health.)