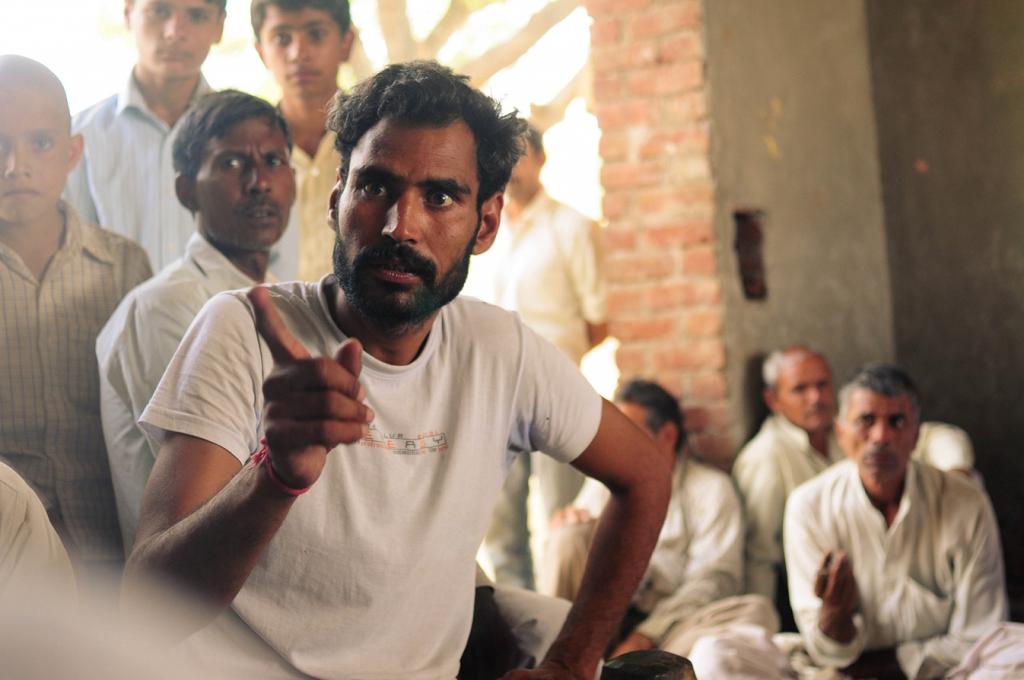 Reports of severe agrarian distress have been pouring in from across the country. Credit: Surya Sen / CSE
The National Democratic Alliance government is scrambling to rescue the agriculture sector from a crisis never seen before. On January 10, Prime Minister Narendra Modi met over 100 economists in a first ever such interaction. Agriculture, rural economy and unemployment dominated the discussions.
Modi’s promise of doubling farmers’ income by 2022 hung heavily over the meeting as reports of severe agrarian distress have been pouring in from across the country. Like in 2017, farmers dumping their produce for lack of fair price are already making headlines. And the government is about to present its last full budget and seek re-elections in just about 16 months.
Government data on economy shows a disturbing trend. In financial year 2017-18, agriculture would be growing at 2.1 per cent compared to 4.9 per cent in the previous year. This is not a good sign given the fact that India had a normal monsoon and was preceded by two below normal monsoons. Usually, after a drought, agriculture growth is higher due to low baseline level.
But, a crucial fact that got buried in the Modi-economists meeting is his own government’s series of rigorous reports on agriculture called “The Committee on Doubling Farmers’ Income” led by Ashok Dalwai.
The first report of the Dalwai committee using inputs and research of over 100 experts has pointed out that India’s agriculture is currently in a deep crisis. And it says so because during 2004-14 the country’s agriculture sector witnessed its highest ever growth phase. The report calls it the sector’s “recovery phase”; a term it defines as historic.
“The agricultural sector grew at the growth of around 4 per cent per year during 2004-05 to 2014-15 and the growth was quite impressive as compared to 2.6 per cent per annum during the previous decade (1995-96 to 2004-05),” says the report.
Politically, it is a not-so-comfortable a message for Modi. The best phase of agricultural growth coincided with the two tenures of the United Progressive Alliance (UPA I-II) government led by the Congress. Just before this, the low growth rate phase coincided with the NDA-I tenure when Atal Bihari Vajpayee was the prime minister.  NDA-I lost elections in 2004 unexpectedly and analysts attributed this to deepening rural crisis during that time.
More so, the report attributes this impressive agricultural growth more to government interventions than to other situational favourable conditions. “The most important factor for improved performance of agriculture, post 2004-05 period, has been the price received by the farmers caused by a number of underlying factors: hike given to MSP, increase in foodgrain procurement, increase in global agricultural prices and strong domestic demand for food,” it finds.
All recent farmers’ protests amid bumper harvests are for increasing the government’s minimum support price (MSP) and to force the NDA government to keep its electoral promise of a MSP plus 50 per cent extra to farmers. In the last three years, less than 10 per cent farmers could sell their produces in MSP, which is growing at pace seen during the 2004-14 period. Also, farmers across the country sold their bumper harvests at 30-50 per cent less than the MSP for all their produces during 2015-17.
The report just adds on to this worry of Modi. It sees the recent farmers’ protests as an indication of deepening crisis in agriculture sector post the “recovery phase”.
“At the basic level, agriculture when defined as an enterprise comprises two segments–production and post-production. The success of production as of now amounts to half success, and is therefore, not sustainable. Recent agitations of farmers (June-July 2017) in certain parts of the country demanding higher prices on their produce following record output or scenes of farmers dumping tractor loads of tomatoes and onions onto the roads or emptying canisters of milk into drains exemplify neglect of other half segment of agriculture.”
Modi government’s performance in agriculture has been lackluster. In 2015-16, agriculture contributed 17.4 per cent to India’s GDP, which was 18.3 per cent in 2013-14, the year before he came to power. In 2014-15, agriculture reported negative growth at -0.2 per cent. Despite this low base, next year it reported 1.2 per cent growth. And in 2016-17, it was estimated to be 4.1 per cent. At an average, the growth in the last four years is around 2 per cent.
The last three years are also known for restrictions on livestock trade. While government fiddled with this sector, the agrarian crisis deepened. The Dalwai Committee Report points out that the biggest contributor to the agricultural growth in 2004-14 was livestock sector, which has never reported a negative growth in the last 35 years. “Thus, the livestock sector is likely to emerge as engine of growth of agricultural sector and can be relied upon for risk mitigation and minimising the losses to the farmers in case of even worst outcomes from others sub-sectors. Previous studies have unanimously reported that livestock as the best insurance against agrarian distress as the sector is the source of sustained income and generates income more frequently than the crop sector,” the report says. And it is known by this time that across north India, due to the restrictions and raids from cow protection groups, livestock trade and prices have crashed.
There are wild speculations that the NDA-II’s last full budget would be all about rural and agriculture sectors. But will it turn around the fate of farmers and rural Indians in just a year? More pertinently, will it reap an electoral harvest for Modi?

The current agrarian crisis is too deep-rooted to witness an instant recovery through a farmer-friendly budget. Let’s look at the income of a farmer in India. During the “recovery phase” itself, a member of an agricultural household earned around Rs 214/month. But his/her expenditure was about Rs 207. In simple term, a member had a disposal income of just Rs 7/month. Since 2015, India has witnessed two major droughts, some 600 incidents of crop losses due to unseasonal rains and other related incidents, and finally in two years of bumper harvests prices for their produces crashed majorly. It means, a farmer is now without any base capital to invest, and nor has he the capacity to take the risk of going back to agriculture. This has added to the crisis that manifests in extreme resentments.
For the first time in recent history, relatively rich farmers were out on the streets protesting for better price for their produce. The Dalwai committee report shows that the government’s move to import foodgrains to curb inflation has majorly distorted the market against the domestic farmers. India’s export of agricultural produces has dipped. It recorded more than five times growth during 2004-2014: from Rs 50,000 crore to Rs 260,000 crore. In a year it dipped to Rs 210,000 crore in 2015-16, or a market potential loss of Rs 50,000 crore.
On the other hand, agricultural import has reported constant growth. It was Rs 30,000 crore in 2004-5, which increased to Rs 90,000 crore in 2013-14, the last year of the UPA-II government. In 2015-16, it reached to Rs 150,000 crore.
Close to 22 per cent of farmers subsist below the poverty line. The dip in farmers’ income, while giving a call for doubling income, shouldn’t be just another grand plan for a “new India”, because agricultural growth critically decides poverty reduction. According to historic data, agricultural growth has much more impact on poverty reduction than any other activity like industrial growth. So, it is time government got its focus back into the factors that once ensured this recovery phase.