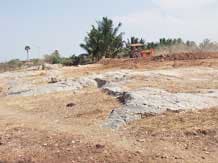 With industrialisation, the location of a land overrides thefertility factors which may pose a threat to country’s food security problems, said a study released today.
“Location of a land holding plays a far more pivotal role than the quality or fertility of land, irrespective of whether the land parcel is in a rural or urban area.”
“The farmers engaged in agriculture on fertile land which has locational advantages get lower economic returns from agriculture than if they were to sell that land. However such depletion of fertile land has its implications on the country’s food security problem,” the report said.
The report ‘Study on Fair Pricing of Land and its Compensation in an Emerging Economy: Case for India’ done by Germany’s GIZ was released by Vandana Jena, Secretary, Department of Land Resources, Pronab Sen, Chairman, National Statistical Commission and Alok Sheel, Secretary, Prime Minister’s Economic Advisory Council.
GIZ supports the German government in international cooperation for sustainable development and international education.
According to the study, location and the level of industrialisation are the determinants of pricing gains for a land over successive decades while fertility loses as a determinant factor.
Fertile land is being lost due to industrialisation, there is a strong case for not touching fertile land for acquisition which is also mentioned in the Land Bill, the study said.
The study said that the circle rates are arbitrary that give rise to social conflicts and there is a need for a fair price discovery.
“There is a rampant violation of circle rates…People are generally more aware of the true price of their land in a more developed region. In a backward district, such transactions are pervasively undervalued, raising a potential for future conflicts,” it said.
Proximity to road/highways and railway stations or future development of these facilities affect land prices across India, found the report.
“The distance from municipal centre or nearest city were next factors that drive land prices. In terms of acquisition by industry or government, intended use of land that might give rise to any of these infrastructure developments may be integrated into pricing model for sellers to reflect a fair pricing that reduces conflict and overall costs in short and long run.”
The report said that land sales in any region are mostly guided by economic and market considerations and there is a close correlation of land prices with variables including inflation and size of land being sold or purchased.
The report has suggested an approach which is neither government mandated nor tantamount to an auction but is based on an informed understanding of the price dynamics for land.
http://www.business-standard.com/article/economy-policy/land-location-overrides-fertility-threat-to-food-security-study-114012200999_1.html
October 21, 2013
0

The WTO is destroying Indian farming

http://www.hindustantimes.com/News-Feed/Columns/The-WTO-is-destroying-Indian-farming/Article1-1137811.aspx
Devinder Sharma
The double standards are clear. In 2012, the US provided $100 billion for domestic food aid, up from the $95 billion it spent on feeding its 67 million undernourished population in 2010 including spending on food coupons and other supplementary nutrition programmes. In India, the Food Bill is expected to cost $20 billion and will feed an estimated 850 million people. Against an average supply of 358kg/person of subsidised food aid (including cereals) in the US every year, India promises to make available 60 kg/person in food entitlement. And yet, while the World Trade Organisation (WTO) is quiet on the subsidy being doled out in America for feeding its poor, the US has launched an attack on India for “creating a massive new loophole for potentially unlimited trade-distorting subsidies.”
India’s subsidies for feeding its hungry are being blamed for distorting trade in agriculture while the US, which provides six times more subsidies than India for feeding its hungry, is seen as doing humanitarian service. The US subsidies are unquestionable, while India’s hungry are being conveniently traded at the WTO. Public posturing notwithstanding, India is believed to have given in to US pressure. Commerce minister Anand Sharma is believed to have assured the WTO director-general that India is committed to take the multilateral trading regime to its logical conclusion. That India is not willing to contest the unfair provisions, and has agreed to a compromise, becomes evident from what the WTO chief said: “What we have agreed in Geneva is we are going to be working on a Peace Clause.”
The US/EU is pushing for a Peace Clause lasting two-three years. India is willing to accept it since it allows the food security programme to continue without any hiccup till 2014. The Peace Clause is a temporary reprieve. Although it expired in 2003, it is being reinvented now to allow India to continue with its food subsidies for the specified period during which its subsidies cannot be challenged before the WTO dispute panel.
The main issue here is the increasing amount being spent on public stockholding of foodgrains and thereby the rise in administered prices for wheat and rice that is procured from small farmers. According to the WTO Agreement on Agriculture, the administered price cannot exceed the ‘de-minimis’ level of 10% of the total volume of production. This exemption is allowed under the Aggregate Measure of Support. India has already exceeded the limit in the case of rice where the procurement price has shot up to 24% from the base year 1986-88 that was agreed upon.
It is, therefore, not the food subsidy Bill that is under the radar, but the procurement price system in India which is now on the chopping block. If India is forced to limit the rice procurement price at 10% of the total production, and refrain from increasing the wheat procurement price in future, it will sound the death knell for agriculture. Agreeing to a Peace Clause only shows how India is trying to skirt the contentious issue and is ready to sacrifice the livelihood security of its 600 million farmers.
According to the US-based Environment Working Group, America had paid a quarter of a trillion dollars in subsidy support between 1995 and 2009. In the 2013 Farm Bill, these subsidies have been further increased. This results in the dumping of foodgrains, thereby dampening farm gate prices, and pushing farmers out of agriculture. In India, wheat and rice growers have merely received $9.4 billion as procurement price in 2012. Forcing India to freeze procurement prices means that the WTO is being used to destroy Indian agriculture.