The survey calls for setting up of a National Floor Level Minimum Wage and endorses the Code on Wages Bill. 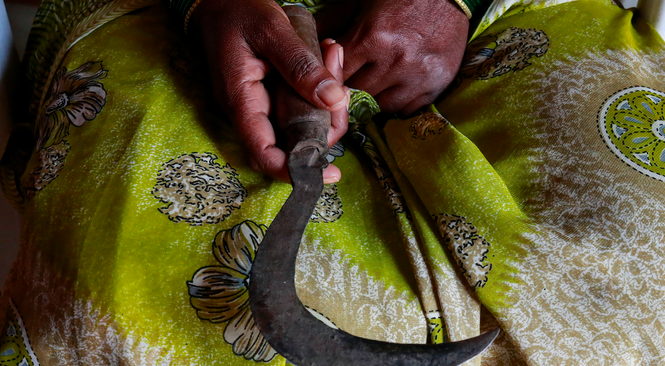 Chhaya Kharade, 36, an unemployed farm labourer poses with her sickle inside her house in Chincholi, March 12, 2019. Image: Reuters/Danish Siddiqui

The Wire Staff
New Delhi: The Economic Survey for 2018-2019 has a dedicated section on minimum wages titled “Redesigning a Minimum Wage System in India for Inclusive Growth”. It acknowledges that despite “outstanding growth” in the last two decades, low pay and wage inequality have hindered inclusive growth.
Citing various complexities in the current system, it makes the case for rationalising and streamlining the system for minimum wages to make it simpler and more enforceable. These complexities include issues like coverage (1,915 minimum wages are defined for various scheduled job categories across various states), lack of a uniform criteria for fixing the minimum wage rate and the fact that “one in every three wage workers in India has fallen through the crack” and is not protected by the Minimum Wages Act, 1948. Domestic workers are covered in only 18 states and union territories.
There’s also the issue of delay in minimum wage revision.
One of the justifications for different levels of minimum wage across states is that they have different levels of economic development. The survey counters this with data showing several advanced and industrialised states with some of the lowest minimum wages. 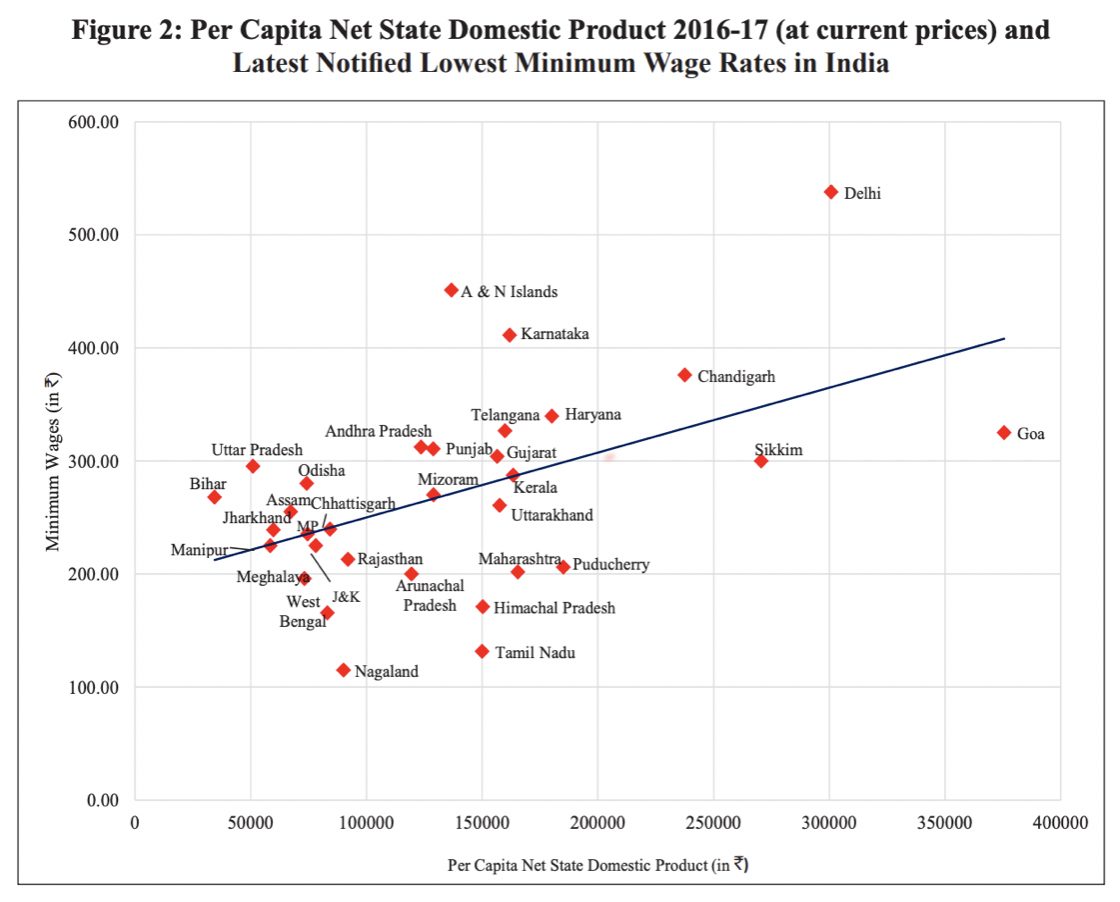 Analysis of minimum wage data also shows a systemic gender bias. The male-dominated job of security guards pays better than being a domestic worker, most of whom are women. Both occupations are classified as unskilled work.
The survey argues that different minimum wages for the same occupation across different states, in addition to a wide range between the lowest and highest minimum wages, also triggers migration of industries towards low wage regions. This can also cause distress migration of labour to better paying states.
Using the current non-statutory National Floor Level Minimum Wage (NFLMW) – Rs 176 per day – as a benchmark, the survey shows that even in 2018-19, some states have minimum wages even below the NFLMW.
Also read: Economic Survey’s Prescription for Job Crisis? Stop Coddling Old ‘Dwarf’ MSMEs
Even though minimum wages in India have failed to protect the lowest paid workers as compliance has been an issue, a study shows the presence of a “lighthouse effect” – so the minimum wage acts as a benchmark that pulls up wages in the low-paid and informal sector by enhancing the bargaining power of vulnerable workers. This has reportedly led to rise in actual wages.
The survey also acknowledges that “existing wage inequality measured by the Gini coefficient remains very high by international standards” and goes on to add that this inequality has increased among regular workers but decreased among casual workers.
Suggestions include proper designing, clarification of set goals and effective enforcement if the minimum wage system is to play a meaningful role. The survey also says that international experience has shown that simple systems are most effective and complex systems least effective, citing the example of the United Kingdom which abolished its system of industry-wide trade boards in the 1980s and replaced it with a simple national minimum wage.
Also read: Economic Survey 2019 Envisions India Rebounding on the Back of Private Investments
The survey also endorses the Code on Wages Bill, one of the four proposed labour codes to replace the existing 44 labour laws. The Code on Wages Bill seeks to merge the Minimum Wages Act, 1948, the Payment of Wages Act, 1936, the Payment of Bonus Act, 1965 and the Equal Remuneration Act, 1976 into a single piece of legislation. It also calls for replacing the twelve different definitions of wages in different labour acts to a single definition in the proposed bill. 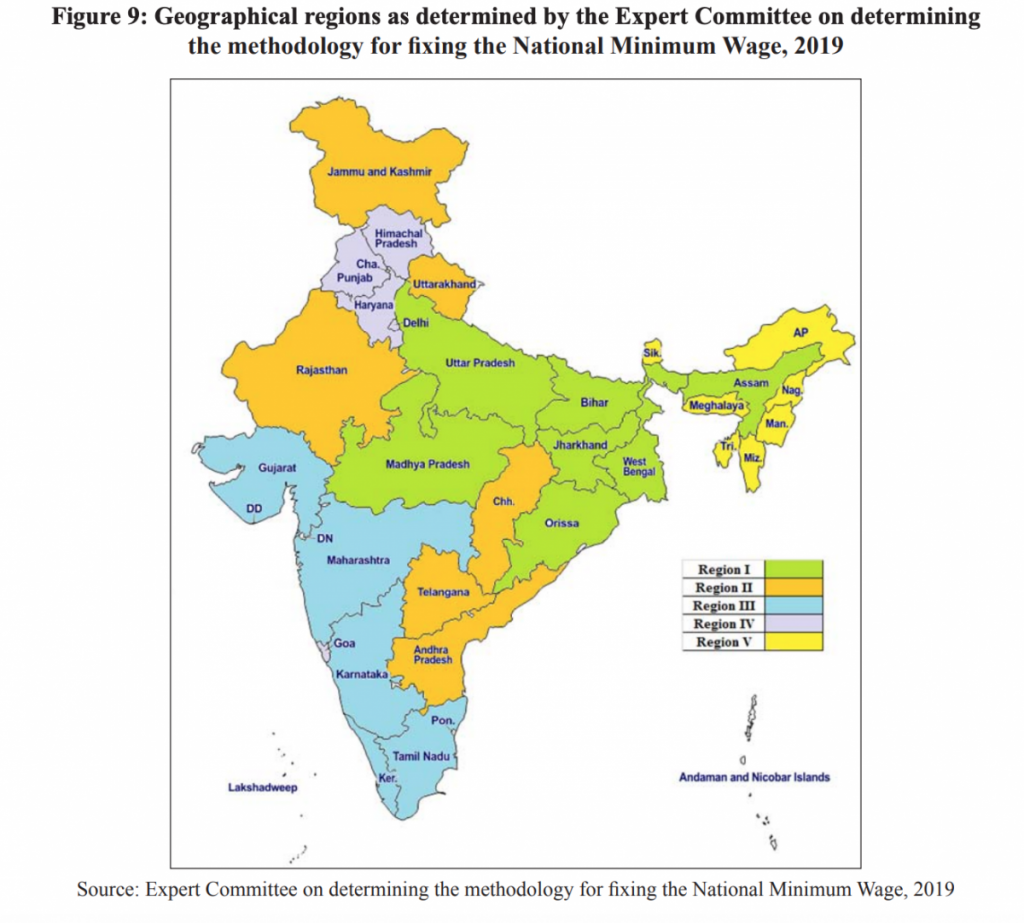 Some of the major suggestions include setting a NFLMW that can vary across the five geographical regions shown in the figure above. States can then set minimum wages which shouldn’t be less than this ‘floor wage’, bringing more uniformity in the process.
To deal with the coverage issue and further simplify the process of setting minimum wages, the survey suggests “the Code on Wages Bill should consider fixing minimum wages based on either of the two factors viz; (i) the skill category i.e unskilled, semi-skilled, skilled and highly skilled; and (ii) the geographical region, or else both” and for it to be applicable to all sectors and to both organised and unorganised workers.
Additionally, the survey recommends the development of mechanisms to adjust minimum wages regularly and more frequently, and the better and more extensive use of technology and grievance redressal through an easy to remember toll-free number to register grievances on non-payments of the statutory minimum wages.