The survey also conferred a lot of credit on the Centre’s move in 2015 to implement direct benefit transfer and Aadhaar-linked payments when it comes to workers’ wages.

New Delhi: In tacit acceptance of the sudden surge in demand for jobs under the Mahatma Gandhi National Rural Employment Guarantee Act(MGNREGA) following the demonetisation move of the government in 2016, the Economic Survey (released this July 4) has called for using the scheme as an indicator of rural distress.
“Demand for work under MGNREGA may be used to develop a real-time indicator of distress at the granular district/panchayat level,” the survey said.
The survey noted that distress at the level of a district or panchayat is not easy to detect in real-time by using current datasets. Even though the National Sample Surveys (NSS) are carried out at household levels, the results are released “after a gap of almost two years”, thus limiting their use by the government to address rural economic distress.
The survey underlined, “By utilising information on demand for work under MGNREGA and correlating it with other real-time measures of weather etc., that lead to rural distress, a dashboard can be created which flashes ‘alerts’ from areas under local distress to enable policymakers to act in a timely manner to alleviate such distress.”
Also read: Economic Survey’s Prescription for Job Crisis? Stop Coddling Old ‘Dwarf’ MSMEs
From July to December 2016, due to jobs lost by migrant labourers after demonetisation, the demand for employment under MGNREGA rose to an all-time high. An Indian Express report in 2017, quoting from the records of the Ministry of Rural Development, said the demand peaked by over 60%.
“The reverse migration triggered by mounting job losses for informal workers employed in the Micro, Small and Medium Enterprises (MSME) has translated into an increased demand for work provided in rural India under the employment guarantee scheme. According to officials, December (2016) — by when much of the rabi sowing is over — usually registers a slight increase in demand, but never to the extent that was witnessed last month,” the report noted.
“Data shows that on November 7 (2016), the day before Prime Minister Narendra Modi’s announcement, 38.52 lakh labourers sought work under MGNREGA. The number fell slightly to 35.60 on December 2 (2017), but thereafter rose through the month and in January (2018), reaching 78.90 lakh on Thursday and 83.60 lakh on Saturday,” it said. The economic survey report also sought an expansion of the definition of the term ‘works’ under the scheme and its regular review keeping in mind the demand curve. Providing an example for such expansions, it said, “Inclusion of de-silting of canals and water bodies in the Water Conservation Mission would enhance their storage capacity and mitigate the frequency of floods.”
The report also batted for improving the skill sets of MGNREGA workers as it would help increase their income and “provide horizontal and vertical mobility to them.”
Calling for interlinking of schemes and programmes meant for rural areas, to help create multiple avenues for income generation and thereby pull more people out of poverty, the survey report said the convergence of MGNREGA with the Deen Dayal Upadhyaya Grameen Kaushalya Yojana and participation of women self-help groups “needs to be strengthened so that supply of skilled waged labourers increase.”
Also read | Potato Chips and Child Exploitation: A Story of Innocence Lost in Labour
The survey also conferred a lot of credit on the Centre’s move in 2015 to implement direct benefit transfer and Aadhaar-linked payments when it comes to workers’ wages.
“While MGNREGA was made effective in 2006, the streamlining of the programme occurred in 2015 when the government harnessed the benefits of technology. This, inter alia, included the implementation of direct benefit transfer and linking it (with) Aadhar linked payments. It leveraged the Jan Dhan, Aadhaar and Mobile (JAM) trinity to credit wages directly into MGNREGA workers’ bank accounts, thereby reducing scopes for delays in payments.” 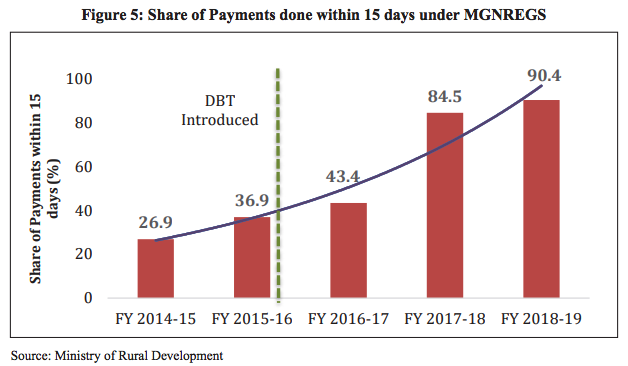 The survey stated that adoption of direct benefit transfers and Aadhaar-linked payments gave “immense credibility” to the experience of increasing effectiveness of the scheme.
However, an independent study, the results of which was released in December 2017 contradicted the government’s claim on speedy disbursal of payments to workers.
Conducted by Rajendran Narayanan from Azim Premji University and two independent researchers, the study that examined 4.5 lakh MGNREGA transactions in 3,603 Gram Panchayats spanning 10 states, highlighted that only 32% of the payment had been done on time. It stated that inadequate allocation of budgetary funds had led to a huge backlog of payment to workers.
“What also needs to be pointed out along with the delay in the payment of wages is that the Centre has calculated the penalty to be paid to the workers for delay beyond 15 days only till the time the FTO (fund transfer order) is prepared. Say, if you work till December 1 and the FTO is prepared five days later, the worker will get compensation only for those five days of delay. However, the days of non-payment after the FTO is readied are not counted even if in many cases they run to months. The Centre is not taking into account the delay on its part. This is in violation of what the Act says,” Narayanan said at a press meet in New Delhi.