The government has to evolve policies suitable to a particular state and fine-tune them according to local needs.

Siraj Hussain
27/DEC/2018
‘Nothing succeeds like success,’ first written by Sir Arthur Helps in Realmah in 1868, is going to guide political parties while they draft manifestos for the next parliamentary election. It seems that the Rythu Bandhu (RB) scheme – also known as the Telangana model of direct investment support (DIS) to farmers – has caught the imagination of our politicians. Odisha and Jharkhand have already announced a modified and improved version of this scheme while teams from various states have been visiting Telangana to study the RB model – a welfare programme to support farmer’s investment for two crops a year.
But did the RB model alone help the Telangana Rashtriya Samiti (TRS) sweep the recent assembly elections?
Farm loan waiver
In its manifesto, the TRS promised to waive farm loans of up to Rs 1 lakh. In fact, in the 2014 assembly elections also, the party had made a similar promise. The outstanding crop loans in 2013-14 were about Rs 14,897 crore. Initially, the government did not want to include loans taken against gold or gold jewellery, post-harvest loans and the ones to tobacco and sugarcane farmers.

However, due to widespread protest by farmers, all these were included in the write-offs and finally, the government paid Rs 16,124 crore to fulfil its promise. This is estimated to have benefitted nearly 36 lakh farmers. But due to budgetary constraints, the loan waiver was done in four instalments spread over 2017-18.

The fresh promise of loan waiver, made in the 2018 TRS manifesto in Telangana, is estimated to cost the state Rs 24,000 crore. So it is not Rythu Bandhu alone which likely influenced rural voters to side with the TRS.

A question thus arises: why could the Rs 16,124-crore waiver not achieve its objective of making farmers debt free? Also, how will a waiver of another Rs 24,000 crore make their farming viable?
Rythu Bandhu scheme
The state government undertook a massive exercise of updating land records for the implementation of the Rythu Bandhu scheme. Teams of officers from the revenue and agriculture departments visited over 10,800 villages and verified 72.13 lakh land titles in order to free them from litigation. As part of the scheme, the state spent a total of Rs 12,000 crore during Kharif and Rabi seasons – Rs 4,000 per acre was given to land-owning farmers for each cropping season, irrespective the of size of land holding.
Refusing to learn from Punjab’s water crisis – which was aggravated due to free electricity – the Telangana government also announced that free power would be made available to farmers starting January 1, 2018.
The effectiveness of four years of loan waivers and one year of Rythu Bandhu in Telangana would be known only once data on over dues of farm loans and farmer incomes is released by NABARD, RBI and NSSO. The first two will do well to release detailed data on loan waivers so that the country gets to know the impact of frequent loan waivers on repayment behaviour of borrowers, and the benefit it brought to various crops grown by farmers.
Procurement of agricultural produce
Direct investment support on the lines of Rythu Bandhu is surely a better model than physical procurement of agricultural produce (except wheat and rice, which are required for PDS) or price deficiency payment, both a part of the Pradhan Mantri Annadata Aay SanraksHan Abhiyan. Price deficiency payment scheme was tried in Madhya Pradesh in Kharif 2018, but it failed in its objective because extensive paperwork and monitoring of mandis was required to make it effective. Moreover, traders’ collusion artificially depressed the mandi prices in Madhya Pradesh. 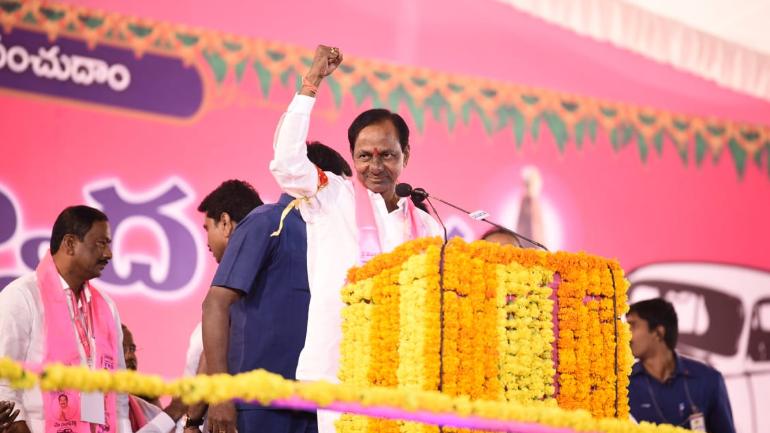 It does not, however, mean that states with a robust procurement infrastructure (like Punjab, Haryana, parts of UP, MP, AP, Odisha and Chhattisgarh) should immediately abandon procurement of paddy and wheat and take to DIS in lieu of procurement. This will result in an immediate crash in prices as the arrivals in mandis is concentrated over a short period of 3-4 weeks. DIS cannot compensate for this price crash and the farmers in these states, accustomed as they are to selling at MSP, are not going to accept such a situation.
Also read: Fact Check: Has the BJP Really Fulfilled Its MSP Promise as It Claims?
State-wise policies
So, the government has to evolve policies suitable to a particular state and fine tune them to local needs. In the last three years, especially after demonetisation, farmers have been hit hard due to the crash of prices in mandis. Neither loan waiver nor DIS addresses this problem sufficiently. Sustained reform of marketing of agricultural produce in mandis is necessary in order to free agricultural trade from the clutches of middlemen who decide the price a farmer gets at a mandi.
Several years ago, the National Egg Coordination Committee created a demand for eggs by highlighting its nutritional benefits. A similar campaign for processed and refrigerated food may create a demand for fruits and vegetables frozen through individually quick frozen (IQF) items. In a glut market, perishable produce can be bought by processors to be used for IQF. The country is now used to buying frozen peas and there is no reason why similarly processed vegetables and fruits cannot succeed in the market.
While repeated farm loan waivers will surely destroy the repayment culture, even a blanket DIS is unlikely to succeed in alleviating the distress of farmers if manipulation of mandi prices continues unchecked.

Ironically the solution to farm distress has to come from the non-farm sector which can absorb surplus manpower and reduce the burden on agriculture.
Siraj Hussain has worked as secretary of agriculture and food processing to the government of India. Presently he is visiting senior fellow at ICRIER.
December 2, 2018
0