How a rural distress helpline in Telangana is preventing farmer suicides

How a rural distress helpline in Telangana is preventing farmer suicides

Set up in 2017, Kisan Mitra provides counselling to distressed farmers and acts as a bridge between them and the government.
The Kisan Mitra team 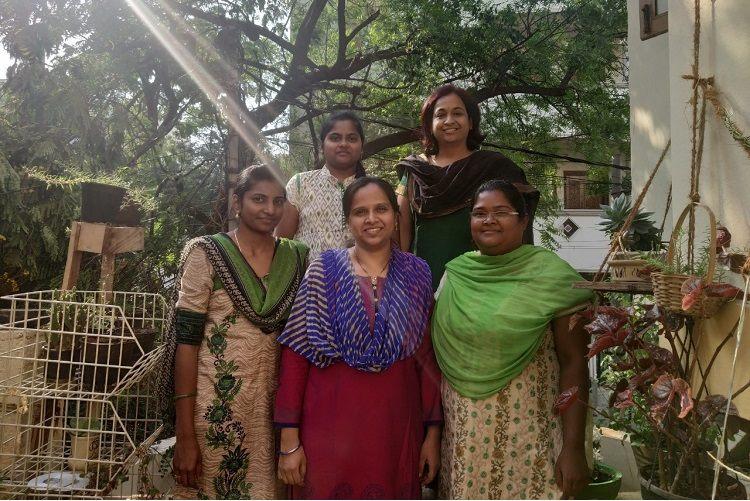 “It was during the 2018 floods that we got a call from a farmer in Adilabad. The caller didn’t need any help for himself but said that his neighbour has been sitting in a corner of his field since morning with a bottle of pesticide in his hand. The depressed farmer had lost his entire crop during the Adilabad floods that lashed the district that year. The farmer later called us, crying. We immediately sent our field coordinator to the village and counselled him. His land was stuck in certain legal issues and with the help of the district collector, we made sure the legal tangles were resolved in a week’s time,” Shruthi narrates one of the many incidents where Kisan Mitra, a distress helpline, has saved a life.
Shruthi, who heads the team of counsellors at Kisan Mitra, is among the many volunteers in the organisation who are lending a helping hand to the distressed farmers of Telangana. Kisan Mitra, a non-profit organisation, is a rural distress helpline that acts as an intermediary between the government and farmers.

Set up in 2017, the helpline strives to provide financial security to farmers and makes sure entitlements reach their pockets on time. Apart from securing an economically stable future for the farmers, the volunteers at Kisan Mitra also provide counselling to farmers who are on the verge of suicide and handle distress calls from farmers who are depressed and need a ray of hope in their lives.

Why are the farmers distressed?

Telangana is one of the states worst hit by the agrarian crisis. Thousands of farmers have killed themselves  since the inception of Telangana and the state stands second when it comes to farmer suicides in the country. So what exactly is worrying the farmers in the state?
Harsha, one of the founder members of the organisation, tells TNM that it’s the lack of proper implementation of schemes that is drowning the farmers in the state under massive debts.
“Kisan Mitra was floated as a subsidiary of the Centre of Sustainable Agriculture after a number of farmer organisations brought to our notice the farmer distress in the rural parts of Telangana. So over the years, what Kisan Mitra has been able to gauge from its activities is that there is no dearth in the monetary schemes for farmers introduced by the government but there definitely is a lack of interest on the government’s side to ensure proper implementation,” says Harsha.
He goes on to add, “For example, a cotton farmer is entitled to a sum of Rs 30,000 per acre from the government. But the vicious cycle of debt begins when the farmer fails to get the amount on time. For him to continue work on the fields, he borrows money from money lenders at exorbitant interest rates. Some farmers will also submit their land deeds as mortgage. By the time the government money reaches him, he might have already paid multiple installments of the interest money.”
And this is where organisations like Kisan Mitra come into the picture.
“We ensure that the entitlements from the government reach the farmers on time. For this, we begin with creating awareness on what the government schemes are, what are the viable means of investment and also insurance, about which most farmers have least knowledge about,” Harsha explains.
Calling for help still a stigma
Of the hundreds of calls that Kisan Mitra receives in a day, most are distress calls made by men. But Shruthi, who heads the counselling team, says there’s a long way to go before men feel that it’s all right to talk about mental health and not give in to the societal pressure of proving one’s hyper-masculinity.
“To begin with, none of the farmers suffer from any psychological issues. It’s various factors joined together that drives a farmer to suicide. In rural areas, mental health is still a taboo to be discussed. It was only last year that a farmer killed himself after suffering from extensive crop loss. His wife knew of his mental condition but was threatened to not to talk about it to anyone. One day, as he got a cue that his wife was meeting the village head for some financial help, he consumed poison and ended his life. Such is the stigma associated with mental health in our country,” Shruthi shares.
And for the same reason, Kisan Mitra conducts awareness programmes not just for male farmers, but also for women who are in a better position to advise and counsel their husbands.
Shruthi, who was working as a psychologist in Hyderabad, left the job and joined the Kisan Mitra team in 2018.
“It’s mostly the small income farmers who fall into huge debts. While many maybe at the verge of suicide, some may also be just seeking solutions to their problems. For farmers who need immediate counselling, we send our field coordinators to help them. If we think a particular farmer needs monetary help, we make arrangements to ensure he is eligible to some sort of monetary scheme under the government. This may not be a direct government intervention but an alternate mechanism where we ensure that the farmer has enough money to buy food or is able to send his kids to school,” Shruthi explains.
Kisan Mitra currently operates out of three districts – Vikarabad, Mancherial and Adilabad. While its field volunteers are limited to these areas, it receives calls and provides counselling to farmers from across the state. Of the 9000 plus calls that Kisan Mitra has received till date, Harsha says they have been able to resolve over 5000 cases and the rest are still pending for some level of intervention from the government.
The organisation also has its presence on WhatsApp, where it tries to disseminate more information on organic farming and provides knowledge on best farming practices.
“We also visit hospitals and meet farmers who have survived suicide attempts. There are many reasons that can lead a man to desperation. Kisan Mitra is currently trying to zero in on these triggers and help victims cope with them,” Shruthi adds.