Jagdeep Singh with a photo of his father, who committed suicide on 11 December, at Sangatpura village in Patiala. Photo: Sayantan Bera/Mint
Patiala/New Delhi: All that Jagdeep Singh wants is a few hours of peaceful sleep. The 24-year-old from Sangatpura village in Punjab’s Patiala district had no clue that the morning of 11 December would change his life forever. At six in the morning that day, he woke up to the sudden death of his 45-year-old father, a farmer and village head, who drank pesticide while his mother was getting the tea ready. The father had run up a debt of ₹40 lakh following several years of losses in farming and dairy businesses, and a failed attempt to find Singh a job in Dubai, which cost nearly ₹14 lakh.

Singh, who holds a master’s degree in history, returned from Dubai after a 11-month wait to find a driver’s job and took to farming. He now gets up at four in the morning. The nights go by worrying how the family land mortgaged to banks can be freed. After a hard day’s work tending to the cattle and the wheat crop, his eyes swell up by evening. Singh repeatedly grasps his hair while speaking. “I am hoping my (younger) brother will find a job… but that may not be enough to pay back the arthiya(commission agents in wholesale markets who advance credit to farmers).”

Since April last year, eight state governments, including Punjab, have announced a staggering ₹1.9 trillion in farm loan waivers. However, no relief has reached the Singh family so far. In June 2017, the newly elected Punjab government led by Amarinder Singh of the Congress approved a farm loan waiver packageestimated to cost ₹10,000 crore. However, a year and a half later, just a fraction of farmers has benefited because of the strict conditions put up by the state.

Exactly a week after the death of Singh’s father, on 18 December, Congress president Rahul Gandhi upped the ante against Prime Minister Narendra Modi. Gandhi said he would not let Modi sleep till the centre announced a nationwide farm loan waiver. Gandhi cited the example of newly-elected state governments led by the Congress in Madhya Pradesh and Chhattisgarh, which signed on farm loan waiver schemes within hours of taking charge, in line with the party’s pre-poll promise, and said that the Congress would announce a national farm loan waiver scheme if the party were voted to power in the 2019 Lok Sabha elections.

The Punjab experience, however, does not inspire confidence. Till date, ₹3,500 crore loans of 428,000 farmers have been waived, according to Jasbir Singh Bains, director of agriculture in the state government. The farm loan waiver has covered less than a fifth of the 2.6 million farmers in Punjab. The total disbursal is just 35% of the promised ₹10,000 crore. 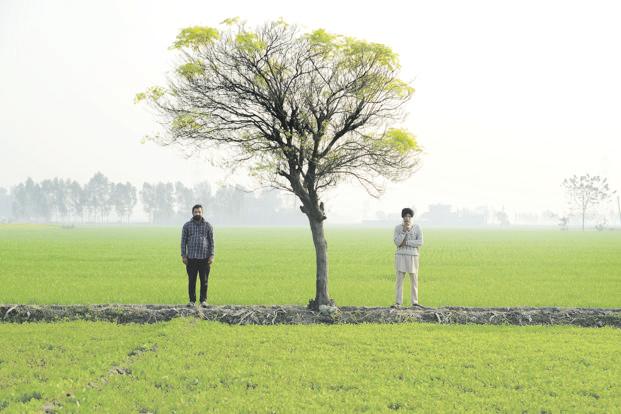 Though Jagtar Singh and Jaswant Singh of Namana village fulfil the condition for debt relief set by the Punjab government, they are still waiting for their loans to be waived.
“During the election campaign, Amarinder Singh promised to waive loans of all farmers, but a set of conditions imposed during the rollout ensured that most were left out,” said Jagmohan Singh, state general secretary of the Bhartiya Kisan Union, Dakaunda, a farmers’ group.

The conditions for availing the farm loan waiver make little sense in a state like Punjab where the average landholding is more than three times the national average. For instance, according to the agriculture census released this year, the average landholding in Punjab is 3.6 hectares (ha), but the state government decided to waive loans up to ₹2 lakh for only small and marginal farmers, who own up to 2ha. This ensured that farmers like Jagdeep Singh, whose family owns 2.4ha, were excluded.

There’s more. The conditions say that only those loans taken by small farmers (who own between 1-2ha) will be waived where the principal and interest overdue did not exceed ₹2 lakh. This meant that a 1.5ha farmer, who owed banks even a rupee over ₹2 lakh, was excluded.

During the Punjab election campaign, Captain Amarinder Singh promised to waive loans of all farmers, but a set of conditions imposed during the rollout ensured that most were left out. Photo: PTI

“With costs of farming going up and returns plunging, a waiver of ₹2 lakh means little to us; we will be back to where we are in no time,” said Nirmal Singh, a farmer from Narmana village in Patiala’s Nabha block. “But this farm loan waiver is more a formality and less a reality… it’s like luring a hungry child with a toffee and then taking it back,” he smirked.

A crowd of farmers gathered around Nirmal Singh complained that as most families did not divide their land between members (say, a 3ha farm is still shared by the father and an adult son and his family), the waiver has eluded them.

In retrospect, the Punjab farm loan waiver scheme appears skilfully designed to exclude more farmers than those included, driven by the lack of fiscal space to deliver on the poll promise (in August last year, the chief minister requested the centre that it be allowed a one-time exemption from the Fiscal Responsibility and Budget Management Act, 2013, which restricts its borrowing to a maximum of 3% of state gross domestic product or just ₹12,819 crore, so that it can implement the debt relief scheme).

Congress would announce a national farm loan waiver scheme if the party were voted to power in the 2019 Lok Sabha elections, party president Rahul Gandhi has said.

For the once-prosperous farmer in Punjab, the cradle of India’s Green Revolution, a debt of ₹15-20 lakh is common and debts of more than ₹40 lakh in a single family are not unheard of. While part of this is driven by the need to keep up with societal pressures—such as spending ₹25 lakh on a daughter’s marriage—the debt crisis deepened as a result of commercial banks flushing farmers with credit to meet their lending targets. Desperate for a solution, the government is now contemplating an Act that places a limit on the number of guests attending a marriage and a forensic audit of the agriculture credit portfolio of commercial banks.

Data from the draft state farmers’ policy released earlier this year shows that Punjab’s requirement of crop loans is around ₹24,000 crore per season, while outstanding loans advanced by banks is ₹60,000 crore.

“There are around 26 lakh (2.6 million) farmers in the state, but banks have issued more than 40 lakh (4 million) Kisan Credit Cards. Over a period of 11 years (2004-05 to 2015-16) the credit offtake has increased by around eight times, while the value of production rose just three times,” said Ajay Vir Jakhar, chairman of the state farmers’ commission.

The 23-year-old Kiranjit Kaur of Mansa district, whose father committed suicide in 2016, adds yet another dimension to the crisis. “I have seen scores of families losing everything to pay for private education and health emergencies… More than loan waivers, we need better public health facilities and schools,” said Kaur, who now helps families, in which farmer suicides have taken place, receive state compensation.